Best Designed Buildings all around the World from Top Architects 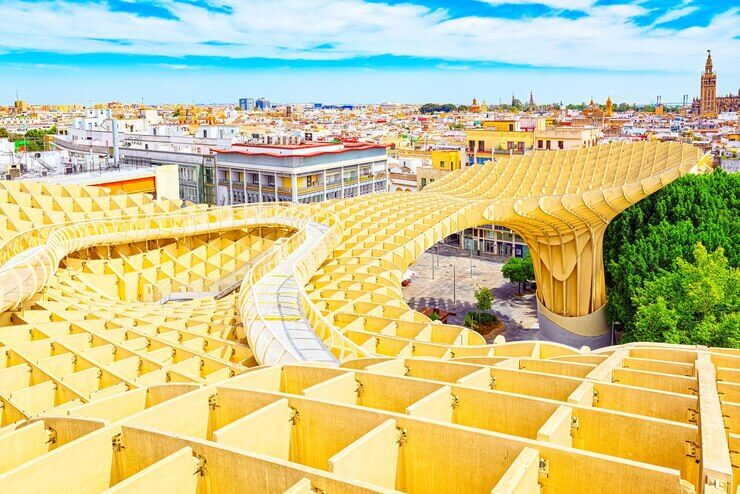 The world of modern and contemporary architecture is simply magnificent and has produced some truly jaw-dropping monuments to human ingenuity and aesthetic sensibility that are certainly worth a good look. The combinations of creative ideas and architectural expertise have led to the existence of some of the best designed buildings in the world. So the design of a building is one of the first things that will capture your attention. If a building is architecturally remarkable, it often becomes a landmark that defines a city. We’ve rounded up a selection of some of the most famous architecture and designs around the world.

Absolute World is a set of five luxury residential condominium skyscrapers located in downtown Mississauga, Ontario, Canada. Construction of the towers was completed in 2012. Designed by MAD architects and Burka Architects, the towers are 158 and 176 m (518 and 577 ft.) tall, 50 and 56 stories high, and have been nicknamed “the Marilyn Monroe buildings” for their curvaceous shape. The tower offers its residents amenities such as a Gym / Exercise Room, Pool, Concierge, and Party Room. The larger tower of Absolute World twists up to 209 degrees from the base and also the tower consists of underground parking up to six different levels.

Another name for Burj Khalifa is Burj Dubai. Burj Khalifa is a sky-high building situated in the city of Dubai, United Arab Emirates. This building has held the tag of ‘tallest building in the world’ for a decade now. It is 828 m tall. The building was designed by the global leader in creating tall structures, the Chicago office of Skidmore & Merrill LLP. Other designers like Adrian Smith FAIA and RIBA were roped in as consultants.

Henning Larsen Architects, Batteríið Architects, and Ólafur Elíasson are the three renowned designers who brought the building to life. The HARPA concert hall and conference center is located in Iceland. It was opened in 2011. Inspired by the northern lights and dramatic Icelandic scenery, the project is sited on the border between land and sea. The building features a foyer area in the front, with four halls in the middle and a backstage area with offices, administration, rehearsal hall, and changing room in the back of the building.

Linked Hybrid is a multi-purpose complex in Beijing, China designed by Steven Holl architects. Composed of eight connected towers, this mixed-use complex represents a compelling vision for 21st-century urban development. The design for this mini-city is connected by sky bridges on the upper floors. The goal was to make a three-dimensional public urban space that could house commercial, residential, educational, and recreational centers.

Guangzhou Opera House is in Guangzhou, China. It was designed by Zaha Hadid Architects. It was opened in 2010. It is one of the most famous buildings in China where important events take place. It can accommodate nearly 2500 people. The venue consists of two dynamic fluid-form structures, the larger housing an undulating, gilded 1,800-seat hall and the smaller home to a more intimate 400-seat space. This masterpiece has dazzled all the viewers with ultra-modern grandeur, the intriguing geometry, and the starry-sky-like ceiling of the Opera House’s main auditorium.

The award-winning design for Metropol Parasol, known as the Mushrooms of the Incarnation, was developed by architect Jürgen Mayer H and Arup. It is located in the Plaza de la Incarnation in Seville, in the autonomous community of Andalusia and the project was inaugurated in March 2011. The billowing timber pavilion is standing 90 feet tall and over 500 feet long. The organic structures, which also house restaurants and an archaeological museum, have viewing platforms placed above them. Under this canopy-like structure, are many important locations like an archaeological museum, a farmers’ market, an elevated plaza, bars, and restaurants.

1987It is the perfect blend of modern and contemporary art, and the world-famous architect- Frank Lloyd Wright constructed this amazing museum. It is located on Fifth Avenue in the Upper East Side neighborhood of Manhattan, New York City. The Guggenheim Museum in Bilbao is not only one of the most famous 20th-century buildings globally, but it is credited with the current phenomenon of so-called ‘iconic architecture’. Museum currently designs exhibits to be viewed walking up the ramp rather than walking down. From the street, the building looks like a white ribbon rolled into a cylindrical shape, slightly wider at the top than at the bottom.

This unique-looking building, which is located on one of the Vltava River’s sides, is certainly a sight to behold. Built in 1996 by architects Vlado Milunić and Frank Gehry, the building gets its name as it resembles the famous figures of dancers Ginger Rogers and Fred Astaire. The style is known as deconstructivist (“new-baroque” to the designers) architecture due to its unusual shape. The “dancing” shape is supported by 99 concrete panels, each a different shape and dimension. On the top of the building is a large twisted structure of metal nicknamed Medusa.

The Petronas Towers, twin skyscrapers in Kuala Lumpur which held the title of tallest in the world between 1998-2004, are iconic landmarks of the capital city. It was created by architects Cesar Pelli and Achmad Murdijat, engineer DeeJay Cerico and designer Dominic Saibo under the consultancy of JC Guinto. The 88-story buildings were joined at the 41st and 42nd floors (175m above street level) by a 58 meter-long, double-decker Sky Bridge. The two towers have a total of 76 lifts, including 29 double-decker high-speed passenger lifts in each tower. Each double-decker elevator can carry 26 persons.