Stunning Architecture Around The World 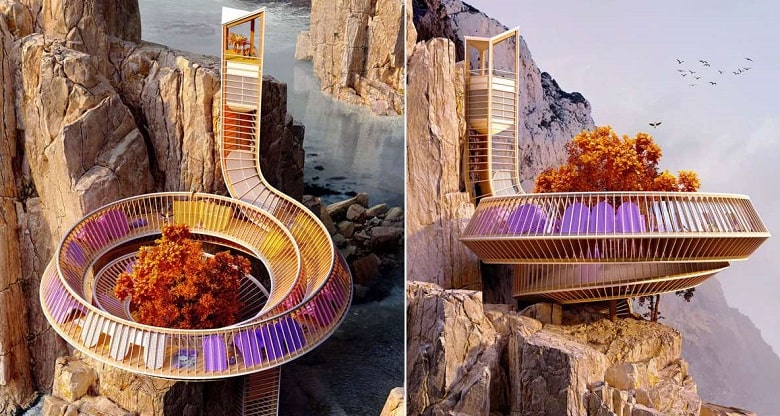 We’re surrounded by amazing and stunning architecture and it has been a part of human life ever since man first realized that he would need shelter. Since then, architecture has come on leaps and bounds, with some truly extraordinary examples to be found around the world that push design boundaries. Architectural works can also simply be appreciated as works of art, offering inspiration in your own life to build a lasting legacy. The world has many amazing buildings from the past and several modern marvels that are being erected today.

Here are some diverse, yet stunning examples of earth architecture from different times as well as parts of the world.

The Spiral House by ANTIREALITY located in the USA is a conceptual, experimental design of a coastal villa integrated within the rocky landscape. The architectural program of the Spiral House is arranged along with an extended corridor-like space where each of the rooms serves both as a passage and basic house function. The floor layout of the villa starts with the least private spaces, moves to the daytime functions, and ends with the master bedroom, topped by a viewing terrace located on the tower. The house framework is made of stainless steel and wooden modules that serve not only as a structural element but also as a facade component.

The Shwedagon Pagoda is a Buddhist temple in Yangon, Myanmar, in Southeast Asia. It is considered one of the oldest pagodas and stunning architecture in the world. This temple is an important Buddhist monument, with a long history that is surrounded by legends. It sits atop a hill and is 99 meters high and covered with hundreds of gold plates and the top of the stupa is encrusted with 4531 diamonds.

The Hagia Sophia established in 1935, that stands today was originally built as the cathedral for the capital of the Eastern Roman Empire in the sixth century and became a mosque in 1453 with the Ottoman conquest of Constantinople. The sheer dazzling beauty of the mosque with its magnificent play on space, light, and color provokes worship in the believer. Hagia Sophia poses on the ground of the first hill of Istanbul, precisely at the tip of the historic peninsula, surrounded by the Sea of Marmara, the Bosphorus, and the Golden Horn on three sides.

Samuel Beckett Bridge is a cable-stayed bridge that joins Sir John Rogerson’s Quay on the south side of the River Liffey to Guild Street and North Wall Quay in the Dublin Docklands area. The architect is Santiago Calatrava, a designer of several innovative bridges and buildings. He built it in the shape of a harp, with 31 cable stays of varying lengths attached to a curving pylon that soars 157 feet (48 meters) high. It rotates 90 degrees and its 404-foot (123-meter) span has two pedestrian lanes.

Jaipur’s most distinctive landmark, the Hawa Mahal also known as “Palace of Breeze”, is an extraordinary pink-painted, delicately honeycombed hive that rises a dizzying five stories. It was constructed in 1799 by Maharaja Sawai Pratap Singh to enable ladies of the royal household to watch the life and processions of the city.

The 11-story Seattle Central Library opened in May 2004 is the flagship of the Seattle Public Library system. Innovative in both form and function, the contemporary, glass and steel building is the third central library to occupy the city block between Fourth and Fifth Avenues in downtown Seattle, Washington, USA. It was designed by architect Rem Koolhaas.

The mosque is located on the edge of Putrajaya Lake in the heart of the city next to Dataran Putra, Malaysia. Construction was officially completed on 1 September 1999 at a cost of around RM250 million. It is named after the first Prime Minister of Malaysia, Tungku Abdul Rahman Putra Al-Haj. It is not only just rose-pink color to attract thousands of visitors per year. With the 160-meter minaret homing to about 18,000 people, the mosque is a perfect fusion of all the stunning architecture from different mosques in the whole world.

The expiatory temple of the Sagrada Familia, the construction of which commenced in 1882, is today one of the emblems of Barcelona, known around the world and visited by millions of people. Architect Antoni Gaudi combined Gothic and Byzantine traditions with his spirituality, making the church unique. The Sagrada Familia is a basilica with one central nave flanked by four aisles, as well as transepts with one central nave flanked by two aisles, forming a Latin cross.

Casa Milà is a block of flats in the L’Eixample district of Barcelona and was designed by architect Antoni Gaudí. The Casa Milàcomplex was built between 1906 and 192 and is one of the most important sights in Barcelona. It is also called the “La Pedrera”, which is Catalan for ‘The Stone Quarry’.  The house consists of two components, which are connected only by the facade, the ground floor, and the roof. Each has its yard and entrance. The front of the house looks like a massive rock, broken only by wavy lines and iron ornaments

The Louvre Pyramid was inaugurated on March 29, 1989, by François Mitterrand, the President of the French Republic at the time. The construction of this monument represents a highlight in the history of museums. Chinese-American architect Ieoh Ming Pei was put in charge of this project, which was completed within 2 years. The main pyramid consists of 673 glass planes that were manufactured by glassmakers at Saint-Gobain. The structure is made entirely of glass segments, and metal poles integrating 95 tons of steel and 105 tons of aluminum were used to lay a strong foundation for this masterpiece. It reaches a height of 21.6 meters, covering a base surface area of 1,000 square meters with 603 rhombus shapes and 70 triangular glass elements.

Himeji Castle in Himeji in Hyogo Prefecture was begun by warlord Hideyoshi Toyotomi in 1581, not far from Kobe, is Japan’s largest and most spectacular castle, and certainly its most visited. It is also known as the Shirasagijo (“White Egret Castle”) or Hakurojo (“White Heron Castle”) due to its bird-like silhouette and white plaster walls. Himeji Castle is one of only twelve original Japanese castles still standing. Himeji Castle is a vast complex with 83 buildings, spanning 5,250 feet from east to west and 5,600 feet from north to west. It has a circumference of 2.6 miles.

One of the stunning architecture is located in New Delhi, the Lotus Temple also known as the Bahai House of Worship or Bahai Mashriqu’l-Adhkar Temple is one of the best architectural marvels in the country in modern times. The Bahai Lotus temple was designed by Iranian architect Fariborz Sahba in the shape of a lotus as it is common to several religions including Hinduism and Buddhism. It is known for its beautiful flower-like architecture and marvelous ambiance. The building is composed of 27 free-standing marble-clad “petals” arranged in clusters of three to form nine sides, with nine doors opening onto a central hall with a height of slightly over 40 meters and a capacity of 2,500 people.