The Most Unique Home Designs around the world 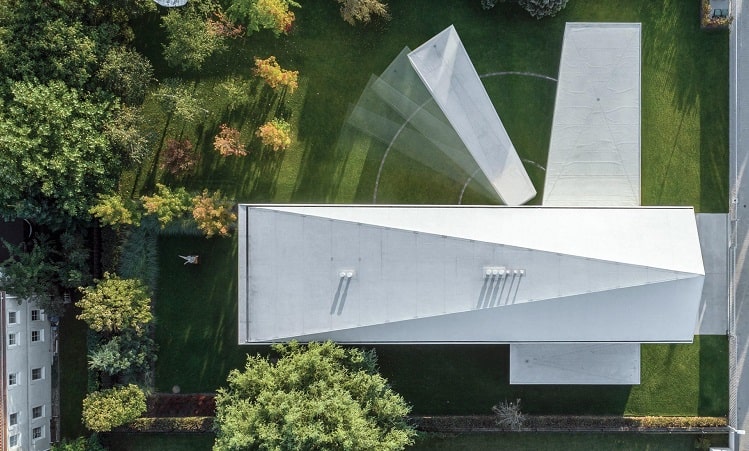 Designing a home will always be the true challenge for an architect. The architect needs to fulfill the user’s wishes, while simultaneously reinventing new ways of living the day-to-day. There are the biggest, most luxurious, most expensive houses in the world. We thought why not compile a list of the unique home designs this time! So without any further delay, let’s jump into it right away!

This house in Poland by architect Robert Konieczny is a static building and impressive suburban family home with one ‘wing’ or kinetic terrace that moves with the sun, allowing constant direct sunlight for its residents to enjoy. It gives residents shade and pleasant airflow when they are there, but also control of the sunlight in the building or extension of its space.

The single-story Cloister house, a large communal living block designed by Singapore-based Formwerkz Architects is spatially delineated into nine sub-grids, featuring twelve courtyards of varying sizes, bringing ventilation and light inside the house. Inspired by the Chinese courtyard house, the project seeks to readapt the vernacular typology in a tropical context. Sitting on a 45,000 sq. ft land, 5.0m concrete walls form a fortified enclosure around the plot, creating a safe environment for the young children to play outdoors without much supervision.

One of the unique home designs located on a steep and rocky hillside in spain, Can Canyís by Caballero+Colon looks like a pile of LEGO bricks, but a lot bigger. The design is based on the principles of maintaining the four stacked volumes while accommodating the internal spaces and their needed uses. Therefore, no space is compromised and the aesthetic exterior form can be free and dynamic.

“Hwa Hun” in Korean, the name of this house means “Blooming House”, by IROJE KHM Architects regarded as a perfect topographic architecture that is derived from an irregular form of the site, steep-sloped topography. This site is located in the heart of Seoul, near the urban mountain “Bukhansan” mountain. The shape of the site which is an irregular polyhedron has been the shape of this house to maximize the land use. To maximize the available size for gardening, nearly every horizontal part of the exterior is covered with greenery. There are some levels, including front, courtyard, stairs, waterfall, rooftop, and even a selection of vertical gardens.

Skylab Architecture of Portland has designed the spectacular 4,200 square feet Owl Creek Residence in Snowmass, Colorado. It has a very unusual, triangular floor plan which is made to respond to the constraints of the site on which the residence is built and was built on the idea that a physical place can deepen the connections between friends, families, and the natural world.

Completed in August 2008, this 12,800 square foot, three-story, contemporary home is located near Ludwigsburg, a city in Baden-Württemberg, Germany. The building’s geometry depends on the foot-shaped impression of the house that beforehand was situated on the site. it creates a semi-public space on ground level between two layers of discretion.

Designed by Tokyo-based architect Yuusuke Karasawa, S House is a two-story-high building broken up into five split levels, creating a series of evenly sized rooms that are connected by staircases rather than corridors. The S-House plan is composed of a rectangular grid that has been divided into quarters that alternate between solid and void.

Designed by Fran Silvestre Arquitectos, this consolidated landscape surrounded by gardens with big trees within the metropolis of Madrid is the fortunate starting point of this new house. It is a two-story residential building that is opened up to the landscape and green mountains of the city with full transparency, elegancy, sensitivity, and minimalist demeanor. Also, it is shaped by metallic and horizontal nature by using local materials on the facade.

The large Hemeroscopium House in Las Rozas, a town just outside Madrid, is a statement by architect Antón García-Abril and his Ensemble. This extraordinary house in Madrid took a year to engineer but only seven days to build due to the total prefabrication of the different elements. The combination creates an architectural space of alternating heaviness and lightness, balance, and instability. House Hemeroscopium embraces a domestic space and a distant horizon. The counterweight is a 20-tonne block of granite that is entrusted with the task of balancing the whole system, which also is an aesthetic characteristic.

The Meera Sky Garden House is one of the most interesting architectural projects signed by Guz Architects. The building is located in Singapore, on the island of Sentosa and it fascinates with its contemporary design. This looks rather like a green oasis than like a house due to its completely grass-covered roof and terraces.  It is a large multi-layered four-story house that tries its best to interact and fit in with the nature around it by adding gardens and greenery at all levels, including the roof.

Orum Residence was designed by Los Angeles-based architectural firm SPF Architects and sits perched atop a Bel Air hilltop almost floating above its surroundings with views of the Getty Center, Downtown L.A., and the Pacific Ocean. The 18,800 square-foot structure takes the form of a three-pronged propeller. Each wing is wrapped in mirrored glass, reflecting the vast Los Angeles basin.

Orum Residence was designed by Los Angeles-based architectural firm SPF Architects and sits perched atop a Bel Air hilltop almost floating above its surroundings with views of the Getty Center, Downtown L.A., and the Pacific Ocean. The 18,800 square-foot structure takes the form of a three-pronged propeller. Each wing is wrapped in mirrored glass, reflecting the vast Los Angeles basin.

Neli M.Denari has designed a renovation project of the Alan-Voo Family House in Los Angeles, California. The project consisted of extending the already existing home with about 1,000 square feet of new space, which totals up to about 2,000 square feet combined with the existing building.

The renovation was necessary to reflect the creativity of the residents and the home is now a part of their creative lifestyle.

LSR113 designed by Ayutt and Associates design is situated on Bangna road, Samutprakarn, Thailand, on the lakefront plot of private housing property known as ‘Lakeside villa’. The design and architectural dialect of LSR113 are enlivened by the conventional Thai house format and space. The ground floor is orchestrated as a Thai customary house plan with a focal yard that capacities as an element anteroom and wholesaler before getting to the primary living space or other spaces

The 3-story apartment block is positioned in Rwanda, Kuwait, and accommodates a trio of separate houses, all organized around tiny glazed terraces. Box House II has a courtyard layout, with living space on one side and a sleeping quarter on the other side. This courtyard layout is placed on the first floor sandwiched between two other floors.

This modern private house in Lodz, Poland designed by Moomoo architects has a novel use of plastic cladding that lends emphasis to the form and its clean lines. It is the first house made entirely of Thermoplian plastic cladding, to dramatic effect. The L-shaped plan is hidden within the blanket treatment of cladding.

This modern residence Called Flexhouse and completed in March 2016 by Swiss architecture and design studio Evolution Design takes inspiration from the terrain. With its wide walls of glass and a ribbon-like white façade that winds its way around the building, this home is so light and mobile in appearance that it resembles a futuristic vessel that has sailed in from the lake and found itself a natural place to dock,” they said.