Top 12 Most Iconic Buildings in Dubai 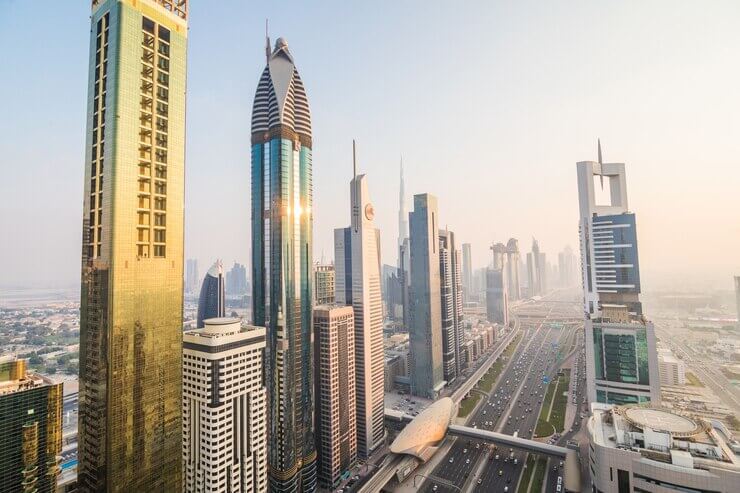 Architectural styles in Dubai have changed significantly in recent years and still continue to do so and are recognizable all over the world because of its superlative architecture. There are several architectural wonders in Dubai that are testament to the emirate’s ever-evolving innovation in the field of development and construction. It became one of the richest cities in the world and generated some of the most daring and groundbreaking engineering and architectural achievements to date. It’s also a well-known fact that Dubai is home to the tallest buildings in the world and a variety of gorgeous skyscrapers that push the boundaries of architecture while paying homage to the roots of Islamic architecture. Today we are going to take you on a journey through the most famous and iconic buildings in Dubai.

Here’s a little more background on some of the most famous buildings in Dubai.

The Tallest Building in the World

The Dubai Burj Khalifa located at the heart of the city in the Dubai Downtown area, with a total height of 829.8 meters not only is the world’s tallest building but it is also the tallest free-standing structure and one of the most iconic places to visit. The unique design of this 162-story structure is a combination of cutting-edge technology, local art, and cultural influences. The project was initiated in 2004 and the tower was officially opened to the public in 2010. The building is a man-made structure in the world and a mixed-use facility with shops, offices, residential sectors, and entertainment venues. It consists of over 200 stories, out of which 160 are habitable. On the 124th level is the observation deck. As you rise to the observation deck of the tallest tower in the world, you get a world-class elevator video show with interesting details about the building and Dubai.

The Burj Al Arab, which means Arabic Tower, is an absolute iconic landmark in Dubai and also a luxury hotel located in Dubai. It is the world’s fourth-tallest hotel having a height of 321 m. It is situated near Jumeirah beach and connected by a bridge on the mainland.  The architecture of this building is most definitely original, as the idea was for it to look like a relaxed sail of an Arabian ship, called a “dhow”. The building features two ‘wings’ that are spread to form a V-shaped vast ‘mast’. The hotel includes 28 double-story floors, celebrity chef dining options, a private helipad at 210 meters.

Dubai Mall is the most prominent and must-visit attraction and also the largest shopping center in the world by area, located in downtown Dubai. It was opened in 2008 in Downtown Dubai and is situated adjacent to the Burj Khalifa. Although an interesting and unusually shaped building, the mall is most notable for the sheer size of its interior space, which extends to an incredible 5.9 million square feet – 3.77 million of which is designated as leasable retail space. There are 1,200 stores as well as cultural and entertainment facilities of world-class at Dubai Mall. This trade and entertainment center has an Olympic-sized ice rink, 160 restaurants, a massive entertainment zone, and a hotel. It also contains the Dubai Aquarium and Underwater Zoo.

The Building with a Twist

The twisted-shaped Cayan Tower, also known as Infinity Tower, is a 360-meter tall residential tower in Dubai Marina, the most modern part of the city. It has a spiraling design where the upper side and the lower side of the building counteract by 90 degrees. Apart from being visually attractive, this unique design protects the inside part of the building from direct sunlight while lessening the impact of strong winds. Opened in 2013, this fairly new architectural wonder is extremely modern inside and out, filled with Dubai offices and apartments.

The Opus is located in Business Bay and the heart of the Burj Khalifa district. It has been designed by award-winning architect Dame Zaha Hadid. The 21-story Opus spans 7,831 square meters and includes a hotel with luxury apartments and exquisite restaurants. The project is made in a cubic form and consists of two glass towers, joined by a glass and steel bridge which creates a striking gap in the building’s center. The interior is technologically advanced and thought out to the smallest detail. This structure is made to serve the purpose of both commercial and retail sectors.

The Jumeirah Beach hotel is one of the oldest hotels and first opened in 1997. Inspired by the shape of a cresting wave, the building stands out along the city’s pristine shoreline of Jumeirah Beach, and it’s within walking distance to another Dubai icon, the sail-shaped Burj Al Arab hotel. The 26-story structure stands 104m high, 275m long. Moreover, the aluminum and blue-plated glass utilized in its construction give the project a surreal fluidity, very similar to a breaking wave the planning is inspired by. The guests can have access to over 33,800 meters of the sandy area.

The Princess Tower is a Guinness World Record holder of the world’s tallest residential building when it was completed in 2012. While the structure does not retain the status, it still evokes an air of awe. The 414-meter residential tower rises a whopping 101 stories and houses 763 residential units, including duplexes, penthouses, 1, 2, and 3-bedroom apartments.

Emirates Towers are one of the most unique skyscraper duos in the world, Emirates Office Tower and the Jumeirah Emirates Towers Hotel. These towers are located on Sheikh Zayed Road in the center of the city’s business district between the Dubai International Convention Center and Exhibition Halls and the Dubai International Financial Centre (DIFC). It is a two-tower structure and Split into a 54-story office tower and 56-story hotel connected by a retail boulevard. The office tower, known as Emirates Tower One, is currently the 41st tallest building in the world. The design highlights two pinnacles, one of which is taller than the other. The pinnacles have an unmistakable symmetrical triangle and tower each. Moreover, they have a covering of silver aluminum boards with copper and silver intelligent glass. Development of the building was initiated in 1996, with the formal opening to general society in the year 2000.

The Palm is a beach resort hotel on the legendary Palm Jumeirah and consists of 2 towers called West and East wings that are connected via the Royal Bridge Suite. This famous building in Dubai Opened in 2008 and contains a vast number of 1,539 rooms, 23 restaurants, and a nautical-themed water park. Its architecture incorporates classical Arabian influences, with semi-precious stones and fossilized shells used throughout the interiors and exterior. Atlantis the Palm houses the Lost Chambers Aquarium which is the largest in the Middle East and Africa. The aquarium is a collection of more than 65,000 marine creatures including sharks and stingrays.

Dubai World Trade Centre known as the Sheikh Rashid Tower was Dubai’s first skyscraper in 1979.  Located adjacent to Sheikh Zayed Road in the heart of the emirate’s financial district, DWTC is a purpose-built tower meant for exhibitions and conventions. This building stands at 149 meters tall and the complex is now used as an office and residential tower as well as plenty of entertainment and dining options.

JW Marriott Marquis is the second tallest hotel in the world. This hotel boasts unique architectural features. The buildings are symmetrically placed on a seven-story podium to get the best views of the Burj Khalifa, Business Bay, and Arabian Gulf. Both towers of this eminent hotel group measure 355 meters and with an equal number of rooms and elevators that showcase a tree-like exterior design inspired by a date palm, an ever-present symbol in Emirati culture and design. The first building of the twin-tower skyscraper was officially completed in 2013 while the other was finalized in 2014.

The Dubai Opera is a cultural and entertainment masterpiece of contemporary design and stylish to Dubai’s maritime history that is far from the tallest building in this article. Its lack of height is make-up by a stunning design inspired by the UAEs traditional dhow sailing vessels. At the beginning of 2016, it opened its gate to the public. It is located in downtown Dubai, close to the Burj Khalifa tower. The building is situated on the Burj Khalifa Lake and has a height of 44m. Though the design of Dubai Opera is inspired by the past, its functionality is contemporary. This landmark development accommodates an opera house, art gallery, performing art school, and themed hotel on an island in Dubai Creek just off the mainland part of the district. The building is also known to be able to transform into three modes. It can transform from a theatre to a concert hall and also to a flat floor mode like that of a banquet. This helps to host a wide range of events that include opera, theatre, orchestras, ballet, live entertainment, fashion shows, and so on.